Being in a Band During a Pandemic 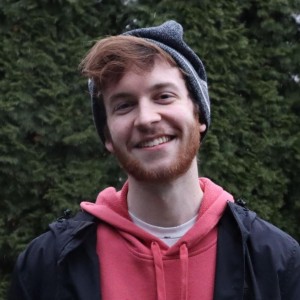 I know, I know – this is totally off-topic. I’m a designer, and that’s what you’re here for. But I’m just too excited to talk about this.

I want Pink Robot Studios to be more than just a design company. I want it to be a reflection of who I am, and this band is part of that.

Just typing that doesn’t feel real. We’ve been actively working on this EP for the last two years, and recording started all the way back in March 2020. Some of the songs are nearly three years old at this point.

Attempting to write, record, mix, and master a project during a pandemic presented its own unique challenges. Initially, we had planned on a fall 2020 release, but that had to be delayed for obvious reasons. Two of our band members fall into high-risk categories, so safety was a priority. Taking an 8-month break from the studio felt agonizingly slow, but we wanted to make sure everybody was safe and healthy. Can’t record vocals if you’re coughing up a lung, right?

The 8-month long break turned out to be a blessing in disguise. These summer months allowed us to write new material and formulate our “sound.” We moved our practices into the garage, standing on opposite corners of the bay with masks on. To stay productive with less frequent practices, we began sending demos and recordings to one another and writing even at home.

These “summer sessions” yielded three new songs – Help Me Doctor!!, Pariah, and January (if you ask me, the three best ones on the EP). This reshuffling of the tracklist resulted in an EP far superior to our original vision in early 2020.

We ended up getting back into the studio in November 2020, albeit with some restrictions. I recorded the drum tracks with our drummer, Ryan, alone in the studio. I was in the vocal isolation booth, and he was in the main studio space. Although there was a physical separation between us, we were still able to feel connected through the music.

Then came bass, guitar, and piano tracks. We had to each come in individually to record our parts, making the process take nearly three months. We even mixed sitting in the vocal isolation booth individually with headphones on.

All in all, the process of recording, mixing, and mastering the EP took a year and a half. But even through all these challenges, we’ve created something I’m immensely proud of.

Check out Film Run Backwards on all streaming services if you like rock music. Oh, and here’s our website. That’s relevant. I made that.

PrevPreviousMy Secret to Inspiration
NextDonating to the Caldor Fire FundNext

Welcome to The Antenna!

Hey there! This is the little blog area of Pink Robot Studios. The Antenna is focused on providing cool updates and spotlighting creativity and love in the Boise community.

What are you waiting for?

I’m always looking for new partners to help me make a difference.

Pink Robot Studios is a Boise-based web and graphic design company. I’m focused on helping people accomplish their dreams while accomplishing mine. It’s a win-win.

By the way, you just found the Secret Page. Shhhh.

I’d love to get to know you and your project! No obligation, and no annoying mailing lists.